Review of Daughter of Smoke and Bone by Laini Taylor 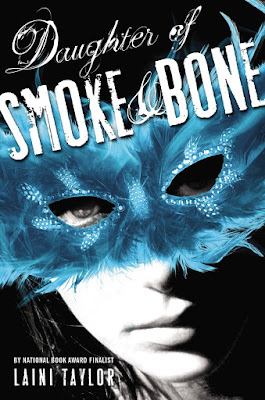 
Around the world, black handprints are appearing on doorways, scorched there by winged strangers who have crept through a slit in the sky.

In a dark and dusty shop, a devil’s supply of human teeth grows dangerously low.

And in the tangled lanes of Prague, a young art student is about to be caught up in a brutal otherwordly war.

Meet Karou. She fills her sketchbooks with monsters that may or may not be real, she’s prone to disappearing on mysterious "errands", she speaks many languages - not all of them human - and her bright blue hair actually grows out of her head that color. Who is she? That is the question that haunts her, and she’s about to find out.

When beautiful, haunted Akiva fixes fiery eyes on her in an alley in Marrakesh, the result is blood and starlight, secrets unveiled, and a star-crossed love whose roots drink deep of a violent past. But will Karou live to regret learning the truth about herself?.

I had heard a lot of great things about this book, and after finally reading it, I can say I wasn't dissapointed.  This book has a complex and unique world and magic system, as well as a really great writing style.

One of my favorite aspects of this book was the fact that there was a world within a world, which means this book took place both in our world, the primary world, and a secondary world called "Elsewhere", that was captivating and unique. This story was very intriguing because the book only gave glimpses of the secondary world until almost the end, when there was the big reveal. This world was accompanied by a complex magic system that reminds the reader that magic has a price, and often, it's a great one. On the other hand, the fantastical creatures that were combinations of several animals were other aspect of this book that gave it a unique touch.

Another great thing about this book was the amazing writing style, which allowed me to easily imagine everything that was described. Nonetheless, I felt like the narrative structure of this book was intriguing when it came to the world, but it took away from the story and the characters, because there was this big secret being kept from the main character about her past and the entire time while I read I felt like there was something missing, but it not in a good, mysterious way.

Nonetheless, I'm very excited to read the next book and see what happens. I really want to explore and get to know more about the world and  the magic system. Also, I want to see how I feel towards the characters and relationships reading a book after knowing what's going on.