Review of Shadow and Bone by Leigh Bardugo 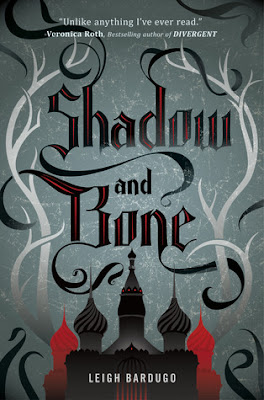 Title: Shadow and Bone (The Grisha #1)


Surrounded by enemies, the once-great nation of Ravka has been torn in two by the Shadow Fold, a swath of near impenetrable darkness crawling with monsters who feast on human flesh. Now its fate may rest on the shoulders of one lonely refugee.

Alina Starkov has never been good at anything. But when her regiment is attacked on the Fold and her best friend is brutally injured, Alina reveals a dormant power that saves his life—a power that could be the key to setting her war-ravaged country free. Wrenched from everything she knows, Alina is whisked away to the royal court to be trained as a member of the Grisha, the magical elite led by the mysterious Darkling.

Yet nothing in this lavish world is what it seems. With darkness looming and an entire kingdom depending on her untamed power, Alina will have to confront the secrets of the Grisha . . . and the secrets of her heart.

I have heard so much about this series and a lot of people considered it their favorite, so I decided to read the first book and see if it was as good as everyone said it was. I'm glad to say I wasn't disappointed.

The first thing I noticed when I started reading this book was the writing style. It was really fluid, in no time I was half way through the book without realising I had read that much and how much time had passed. The writing really kept me captivated, but the pace also had a lot to do with that. Even if the plot for the first half of the book was more focused on world building and character development, I never felt bored and I never felt like the pace was off. On the other hand, the second part was a lot more action packed and the writing and pace really worked for that as well.

In regards to the characters, there were some really interesting characters, especially, the Darkling, who is very intriguing and mystyrious, and I didn't know what to believe about him for most of the book. I also found Genya fascinating and I really want to see her again in the next book and see how she's dealing with things. Nonetheless, I though the main character, Alina, was alright, but I really didn't find anything that set her apart from other main characters in YA fantasy books. Also, I didn't like Alina's best friend for the first half of the book, and even later on, I didn't feel like his character was fully fleshed out.

The world building and magic system were fascinating. It was set in a world resembeling or inspired by Russia and rusian culture, which was quite different from other things I have read in the YA fantasy genre. In regards to the magic system, the color division, the color representation of the type of magic, and the powers itself that they had, were unique and interesting.

I would definitely recommend this book to anyone who likes YA fantasy books with intriguing villains, great writing and a world and magic system that makes you want to read without stopping.