Book Review: The Opposite of Loneliness by Marina Keegan 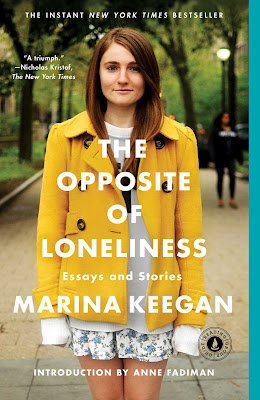 Title: The Opposite of Loneliness

An affecting and hope-filled posthumous collection of essays and stories from the talented young Yale graduate whose title essay captured the world’s attention in 2012 and turned her into an icon for her generation.

As her family, friends, and classmates, deep in grief, joined to create a memorial service for Marina, her unforgettable last essay for the Yale Daily News, “The Opposite of Loneliness,” went viral, receiving more than 1.4 million hits. She had struck a chord.

Even though she was just twenty-two when she died, Marina left behind a rich, expansive trove of prose that, like her title essay, captures the hope, uncertainty, and possibility of her generation. The Opposite of Loneliness is an assem­blage of Marina’s essays and stories that, like The Last Lecture, articulates the universal struggle that all of us face as we figure out what we aspire to be and how we can harness our talents to make an impact on the world.


I read this book because a lot of people said or wrote amazing things about it, and I was really intrigued by the title of the book and the tragic story behind the writer. This book has an introduction, a speech, nine stories in the fiction part, and eight essays in the non-fiction part. I loved the introduction to the book written by one of Marina's teachers, I liked the speech "The Opposite of Loneliness" even if it was not as extraordinary as I thought it was gonna be, I really liked four stories in the fiction part and four of the essays in the non-fiction part, which basically means I enjoyed around half of this book and the rest of the time I was a bit bored.

I think Marina Keegan was a very talented writer, but when I was reading this book I often felt that I could see the talent and the potential in the writing, but it still needed a lot of work to be truly great. Nonetheless, I could see the potential, and I think this book would have recived a higher rating if it wasn't because not only did I feel like the writing needed more work, but also because a lot of the stories or essays were focused on random or very particular things that would only be interesting to certain people. I felt like Marina's writing was better when she focused on subject or topics that were closer or more personal to her, because for me, when she wrote about more random topics it was really hard to connect with the stories.

Nonetheless, while I was reading this book and after I finished it, I felt this incredible desire and inspiration to write more, and I feel that just because of that, reading this book was a great experience. I would really reccomend this book to every aspiring writer.

Have you read this book? Did you enjoy it? Are you planning on reading it?